Content marketing is a buzzword that comes up everywhere on the internet. Really there’s nothing new about it, though. Good marketing has always been based on good stories—that is, on relevant content for relevant individuals. But, in order to create relevant content, you need to know well who you’d like to impress.
Let’s take a look at an example. Mercedes-Benz has recently launched an ad titled Grow Up.

Do you think this ad is appropriate for their target audience? If you picture a typical buyer, climbing out of the car with his beer belly bulging under his ironed shirt, you will agree that this ad is completely off-target. An average Mercedes buyer is fifty-seven years old, whereas this particular ad targets kids, who sometimes can’t even afford to have a round of beer with their friends, let alone buy a luxury car.

So, what’s the idea? For a while now, Mercedes-Benz has been trying to attract younger customers and so it is persistently addressing younger audiences. In addition to launching an updated product (i.e., the Mercedes-Benz CLA) and using a variety of activities on the social media, the company also activated the vlogger Casey Niestat, an influential individual in this demographic group. Mercedes-Benz likes to point out in its statistics that the CLA has been its best product launch in the past twenty years and that the average age of a CLA owner is significantly lower compared to other Mercedes models: forty-six. Impressive, but why does the manufacturer address an audience two decades younger in its ads?

A calendar for designers or do-it-yourselfers?

Another example: the 2016 Merkur calendar.

At the end of 2015, the Slovenian hardware retailer serving both professionals and do-it-yourselfers launched an attractive calendar, whose aim was to stimulate creativity among its customers. I admit that I really liked it, myself, but then a colleague pointed out the gap in communicating to the right buyer persona. I found the calendar pretty and refreshing. So, what was the problem? I’m not a typical Merkur customer or at least not a customer that would seriously engage in household repairs and tasks. A thirty-nine-year-old Joe Sixpack probably is, but he cares more about pure practicality than playful creativity. The calendar may not have even been designed to target the right buyer persona at all . . . and if Pirelli has done well with theirs, why couldn’t Merkur?

What can we learn from these examples?

1. Define your buyer personas.
Knowing your typical buyer is key. Define your typical customers by looking at why they would use a specific product or service. Breathe life into them and think about how you can most easily contact your buyers.
2. Listen to your customers.
What do you know about the people that need your product or service? What are their fears, challenges, and desires? Have you adapted your marketing content to different buyer personas? Invite them for a chat and listen to their needs. Do you make them feel that you understand them? Do you truly understand them?
3. Create a good story.
Customers will accept a story that they can identify with, they can learn something new from, or that can help them reach their goals. Before you post or publish anything, think if the content you’re publishing is actually useful for your target customer.

The formula for success is pretty simple. Create an excellent product or service and wrap it in a “compelling” story. If you have trouble finding the right words, we’d be happy to help. 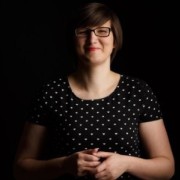 In FrodX, Mojca helps our clients to achieve the objectives set. In doing so, she paves the path to success with her extensive experience in journalism, public relations, event management, and digital marketing. She is very enthusiastic about new technologies but at the same time pays attention to content. Mojca is inspired by passionate people, fresh ideas, juicy content, and daring innovations.